I’m supposed to be doing the daily exercise thing as soon as I wake up in the morning. “Only 5 minutes a day!” but I woke up this morning cold and annoyed at the cat so my first thoughts were things like, “I’m going to feed you to pigeons, cat.”, not looking at my neighbors from my open window while dancing an Irish jig because I need the “open air”. Although now that I think of the bar I could raise around here by kicking my own buttcheeks while I stare down a groggy-eyed neighbor who was just woken up by Riverdance, the morning jigs take on a whole new importance.

I haven’t done the exercises yet, though. I’ve thought about doing them, or rather, how I’m not doing them while I sip my coffee and judge people on social media before the kids wake up and demand their breakfasts. I should do them, if only for the power-play on unsuspecting neighbors and the added bonus “concerned look” from my husband.

I haven’t been sitting around on my comfy pants laurels, though, so give me a break. I have regularly been walking around the neighborhood with my nurse friend (I take a nurse in case I die) on her days off, or when she forgets how much I embarrassed us on our last walk, and yesterday I went on a hike through the Malibu hills (or are they mountains? I’m from Colorado so everything else is hills. Deal with it, hills) anyway, we were hiking with the Cub Scouts and it was a thing and I demand exercise credit and possibly an award for it.

First of all, we get there, we’re not even walking yet, we’re just there in a big group and the bugs begin surrounding me like they can already smell my death, which is flattering considering we decided to meet in front of the bathrooms.

I smell worse than public bathrooms.

I’m trying to act cool like this doesn’t bother me as the Scout leaders start talking about safety.  They’re showing us these high resolution, charts and arty photographs and I’m standing here looking like Pigpen suddenly realizing that I still have no idea what poison oak looks like even though I’m right here looking at a picture of it.  Like I see it on those charts in all of its various forms and colors, but I promise I will be the one who will walk right into a whole patch because they’re pretty much like any other plant growing around. And here’s the thing with this crappy plant, from what I think I understand, you don’t even know you touched it for like days and then your skin sets itself on fire. Like is it shingles? Is it an angry demon? How would I ever know? This is why I avoid the outside. Bugs and poison. Maybe there is something to exercising inside in front of a screened window. I mentally note this as I slap away some flies that were hanging out and probably starting to lay their bug eggs on my calf. I should’ve gotten one of those beekeeper suits or something. In fact, maybe that’s just how I go outside from now on. I’ll just become “The bug suit lady” to the kids. Annoyingly, I did not have a suit on this journey and I did not know what plants were demons and I hoped that maybe my cloud of flies would protect me and I don’t wake up in a week clutching a bible.

But we did it. We hiked. My legs were shaky, the den leaders were picking up trash as they went and looking at me like it’s my turn next. Dude, I was lucky I could lift my leg to climb up the really steep path, the candy wrappers will not be picked up by me. You’ll have better luck thinking that a bird will get excited by the glint off the shiny wrapper, pick it up and fly it off to a trash bin than you do of me doing it.  I was also in my high-top Chuck Taylors because athletic shoes are super ugly and I will suffer for my fashion. Even if it means slipping off a cliff to my death. I did not slip and die but I felt like it could’ve happened at any given moment. 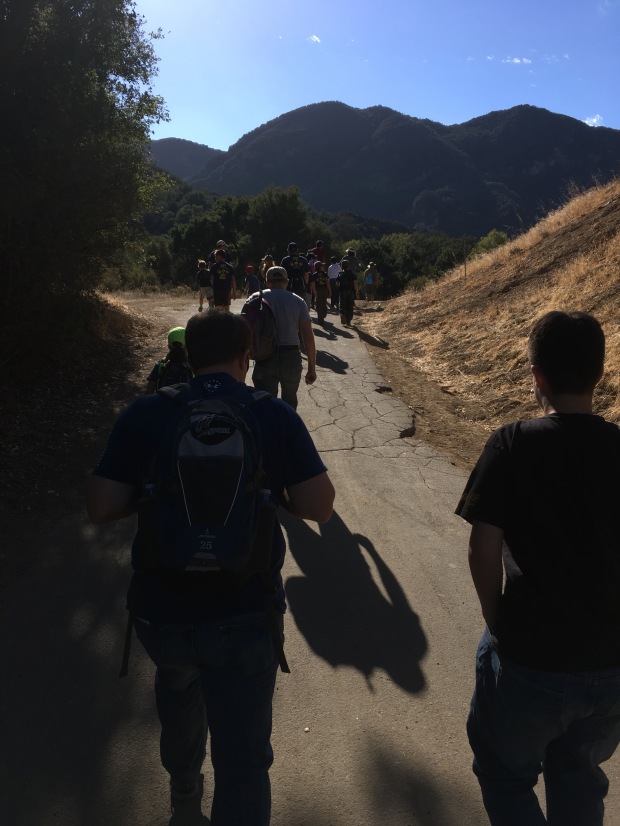 This picture makes it appear that I am really tall, towering over all these men and children.

Anyway, I went outside. I did exercise. I worried that kids were going to fall off tall rocks, I got bit by bugs. I do not know what poison oak looks like, I am not tall. See, I do not feel the same sense of dread or general bug infestation from my living-room, so tomorrow, I jig.  And stare down the neighbors. It’s much more my speed.